3rd April 1945
From “first light” the Squadron took over duties of “Pink Section” and had two aircraft on standby on runway. At 16.50 hours 2 reds were fired from Flying Control and the first British Jet Aircraft “Scrambled” from European Theatre Operation. F/Lt. M. Cooper (Kenya) and F/O. T.D. Dean were pilots. Meteors were “vectored” to patrol Brussels area at 15.000 feet. Both aircraft landed 17.20 hours after uneventful patrol. It was later confirmed by 84 Group G.C.C. the “plots” were friendly. However the first “Scramble” keyed up the Squadron now anticipating plenty of action.

4th April 1945
Cloudy and cold. “Pink” Section were Scrambled at 10.25 hours. Pilots were W/O. G. Wilkes and F/Sgt. R. Easy who made uneventful Patrol of Brussels area at 15.000 feet. At 12.00 hours F/Lt. M. Cooper and F/Sgt. P. Watts flew on uneventful Scramble over Brussels at 10.000 feet. Some local flying during the afternoon, one section flying over Nemejegen(Nijmegen)were fired at by the A.A. But Meteors were not damaged and made off before the gunners could fire again = the pilots avoid the area as one would a plague.

6th April 1945
No operational flying. Some local flying – again the Meteors were fired at while over Eindhoven, another spot to avoid until the A.A. aircraft recognition is 100%. A Dutchman (civilian) was seen wandering around the Meteor aircraft at “A” Flight dispersal. On being challenged to produce identity papers the Dutchman immediately began to show fight – a bad thing (for the Dutchman) a quick one two from the pilots and the Dutchman was taking a ride under escort to the nearest Police Centre.

7th April 1945
One Scramble today. “Pink” Section (F/O. K. Ridley DFM and F/O. R. George) took off at 15.20 and were vectored to Brussels area at 20.000 feet. Pilots returned with NIL report. The Squadron Operations Room started today – as as 135 Wing left for B91. Local flying during the day. The Officers Mess consisted of three small houses on main Breda/Tilburg road, one room being put aside as Mess and bar. Some hard work by pilots together with odd furniture, decorations and wall sketches by I.O. completed a very cosy bar – it was my duly “Christened” at night.

9th April 1945
Morning ground mist clearing towards moon to fine and warm. W/Cdr. A. McDowall flaw to B91 to prepare for Squadron move. Capt. Clarke (A.L.O. of 135 Wing) remains with 616 Squadron as A.L.O. “Pink Section” (F/Lt. G.N. Hobson and P/O. R. George) were Scrambled at 18.25 hours, unfortunately some aircraft of 149 Wing not cleared of runway delayed “Pink Section” taking off for a few minutes, about five minutes after being airborne F/O. R. George flying at 24.000 feet saw a single smoke trail at 30.000 feet direction NE/SW. P/O. R. George was too far behind to see the aircraft, later 84 Group reported that the smoke trail was thought to be enemy Jet aircraft. The four Meteors Mk.III White Camouflage were flown back to Colerne by F/Lt. R.C. Gosling, F/Lt. M. Cooper, F/Sgt. R. Easy and W/O. F.G. Packer.

10th April 1945
Weather fine and warm with slight morning haze. Nothing to report.

11th April 1945
Two un eventful Scrambles. Both Sections were vectored to Patrol Brussels/Antwerp area at 15.000 feet. Sate during the day: One section Readiness (on runway). One section 15 minutes.

12th April 1945
News today of Squadron move – this time to B91 Kluis near Nijmegen (few miles south of Nijmegen). A busy day for all packing and preparing to move.

13th April 1945
Weather overcast with some rain. At 10.30 hours 10 Meteors took off and led by W/Cdr. A. McDowall DFM flew in formation to B91. At 11.00 hours the convoy started off. By evening all tents had been pitched in Pine open woods surrounding the airfield. B91 consisted of one metal strip of 1500 yards. Squadron took over “Pink” Section State immediately on arrival. Soon after dusk heavy gunfire was heard from direction of Nijmegen where Canadian First Army were attempting to break through to the North of Holland. News received of death of President Roosevelt.

14th April 1945
Weather overcast till late afternoon. One “Pink” Section at readiness, one section at 15 minutes. Everybody working hard to clear the space for tents. No operational flying. Dry weather favoured Squadron settling down camp life. During the evening all pilots assembled to be briefed by Commanding Officer on possibility of Meteors being used in armed Recco Flight over North Holland.

15th April 1945
Weather overcast during whole day. No operational flying. W/Cdr. A. McDowall DFM made one flight during the afternoon. Squadron Adjutant (F/Lt. E.P. Howell) briefed ground crew in readiness for yet another move. The Allied Front now moving Eastward across Germany means that Fighter Squadrons soon find their Bases out of range of enemy targets.

16th April 1945
Sections of Squadrons today made their debut in operation area.
An area of West Holland bounded by Utrecht/ Amsterdam/ Leiden/ Wageningen.

Apart from slight haze on ground perfect weather favoured the Jeta on their first “show”. No traffic of movement was observed on the roads. Meagre light flak was encountered by besouth Section but all pilots made base without injury or damage to aircraft.

Note: In January 1945 the squadron joined 2nd Tactical Air Force. A detachment moved to Belgium in February, and in April the entire squadron moved to the Netherlands. The first operational sortie, a ground attack mission, was flown on 16 April 1945.

17th April 1945
Twenty-three sorties flown today over Western Holland. F/Lt. M. Cooper (Kenya) triumphantly presented the Squadrons first claim – first “Jet” pilot to spoil the enemy in enemy occupied Europe. F/Lt. M. Cooper attacked a large M/T near Ijmuiden. Strikes were observed and the vehicle swing off the road and stopped. All the roads in area Rotterdam/ Ijmuiden/ Amsterdam/ Utrecht were carefully searched for any targets, but remainder of Section returned with NIL reports. At 19.30 hours Squadron reviews? except “Pink” Section at readiness.

18th April 1945
Weather continues fine and warm – making life under canvas very pleasant. Everybody looking very fit and suntanned. No flying until midday owing to ground haze. At 12.15 hours the first Section led by W/Cdr. A. McDowall DFC took off for Recce of Western Holland. Section covered the area at 8000 feet without observing any traffic movement. A further 20 sorties were flown and further claims were recorded. F/Lt. M. Cooper (Kenya) one M/T destroyed west of Woerden. W/O. G. Wilkes one Staff car destroyed at Woerden. F/Lt. J.K. Rodger one Staff car destroyed Utrecht. Again intense Flak was encountered at 3.000 to 5.000 feet. Flak was reported bursting at same height as Meteors but always well behind – “A good thing begs? says the pilots”, preventing the Meteors sp spread is foxing the gunners. Today the B.B.C. News Bulletin included a reference to “British Jets in action in Holland”.

20th April 1945
Yet another Squadron move to catch up with the fast moving Allied line Eastwards. Early morning the convoy left for B109 Quackenbrucke (Germany) some 45 miles SW of Bremen. About 11.00 hours 13 aircraft led by W/Cdr. A. McDowall DFC, leading the Squadron in the Commanding Officer landed the first British Jet aircraft in Germany. The rest of the day spent unloading and making ready everybody thrilled to be in Germany but strict instructions issued to remind all that fraternisation with Germans forbidden.

21st April 1945
Cloud and rain. Everything fixed and settled. The airfield in good condition though airfield buildings demolished. All personal carry arms on airfield.

22nd April 1945
No operational flying. Weather overcast with cloud at 1000 feet. Later when weather cleared W/Cdr. A. McDowall DFC took off for local flying – the first British Jet to take off from German Airfield. By night aircraft were ready for operations.

23rd April 1945
Yet another mile stone in history of Meteors – for today 4 meteors took off to make Recce or “Area ?” bounded by Bremen/ the Frisian islands/ Emden/ Oldenburg. S/Ldr. L.W. Watts DFC led the section, other pilots taking part were F/O. A.H. Stodhart, F/Lt. R.C. Gosling and F/O. H.J. Moon. The Recce proved uneventful – pilot flying into 10/10 cloud at 2000 feet and under.

24th April 1945
Fine with cloud at 3000 feet. The Squadron briefed for Armed Recce of Area “Z” and to “beat up” Nordholz Airfield a few miles south of Cuxhaven. First Section of 4 officers was W/Cdr. A. McDowall DFC. Flying out at the sun at 8000 feet the Commanding Officer led the section down to attack – results 1 Ju88 damaged on the ground and 1 M/T to W/Cdr. A. McDowall DFC. Two railway petrol tankers and Airfield buildings to F/O. I.T. Wilson, 12 railway carriages were strarad by by F/O. H.J. Moon who also silenced a gun post with a long burst. No doubt many or the Luftwaffe were keen to see the first British Jet! F/Lt. T.G. Clegg found a large truck full of troops on the airfield, and diving in low gave them all a fine head on view. Unfortunately for the troops all four cannons were blazing, now the troops are not alive to benefit from the or? aircraft recognition. F/O. I.T. Wilson did a fine job coming back to base on one engine. Another Section led by S/Ldr. L.W. Watts DFC flew to Nordholz in the afternoon with F/Lt. J.K. Rodger and F/Lt. G.R. Hobson. S/Ldr. L.W. Watts DFC claimed one M/T and 1 airfield building while F/O. J.K. Rodger attacked a Flak Pont. Intense Flak from Nordholz and as one pilot said “I could have put my wheels down and taxied across”. However no injuries were reported though 2 aircraft received slight damage. Two other sections made Recce in area “X”. S/Ldr. D.A. Barr and F/O. T.D. Dean damaged an M/T near Wittmund. The other Recce proved uneventful.

25th April 1945
“A” party moved off to B152 Fassberg travelling overnight, Squadron being attached to 122 Wing 83 Group for operational purposes. 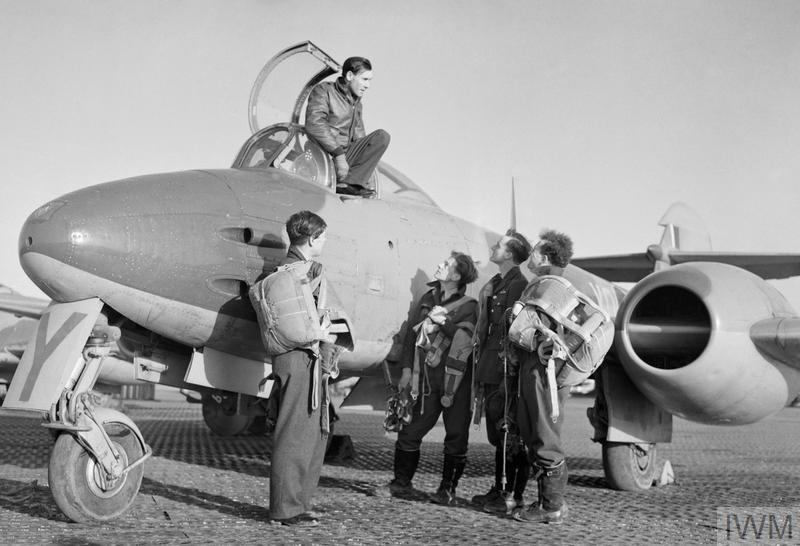 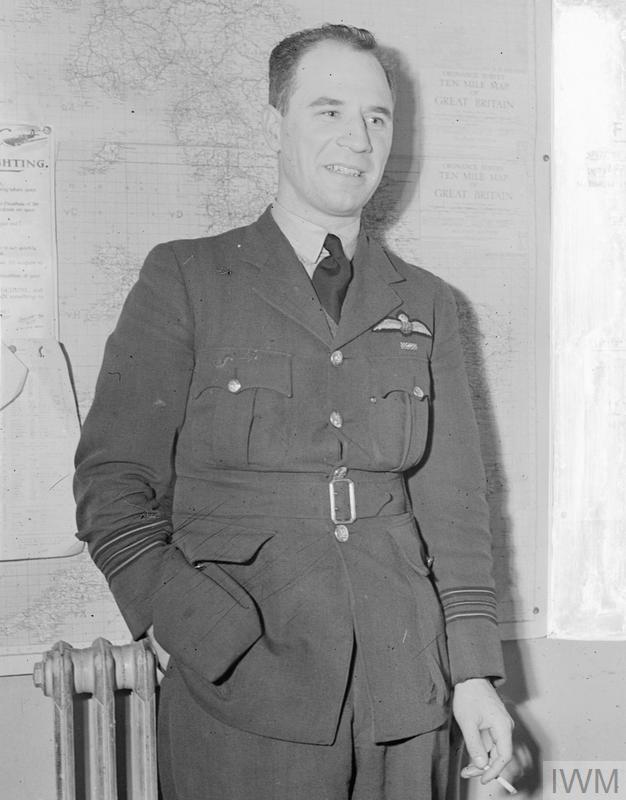